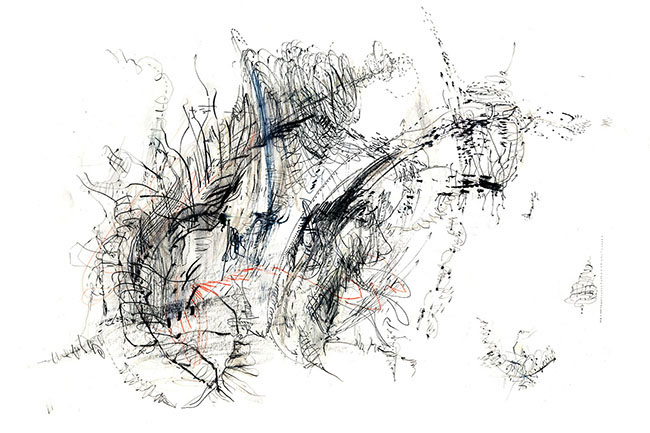 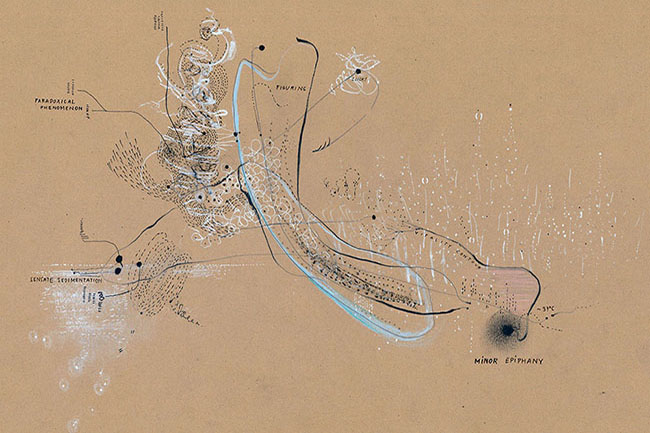 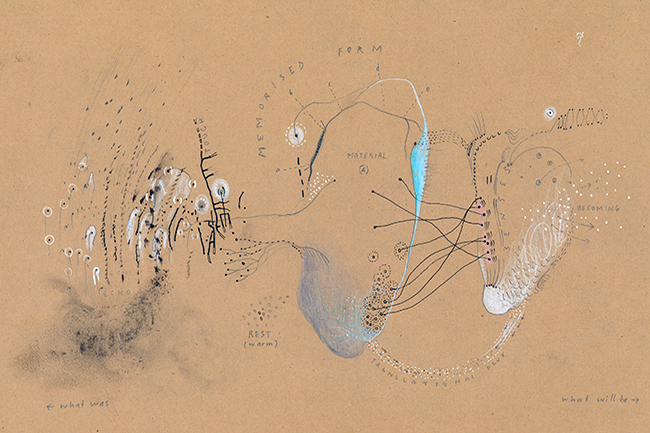 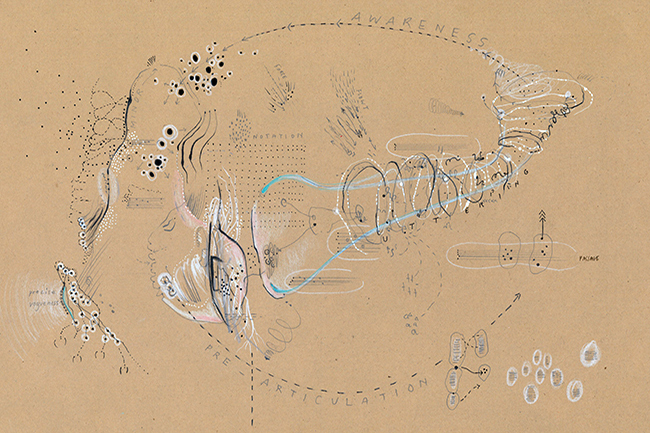 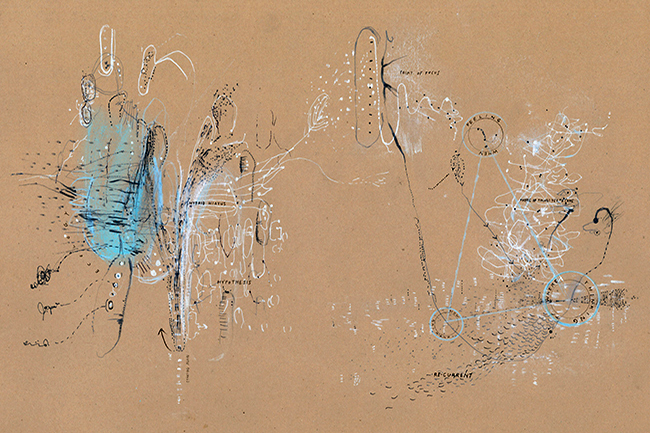 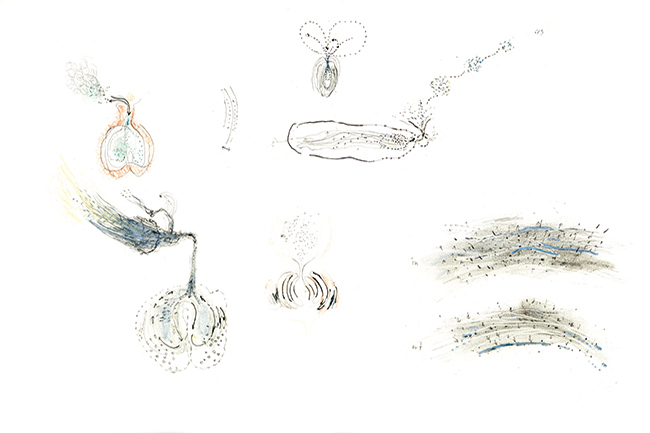 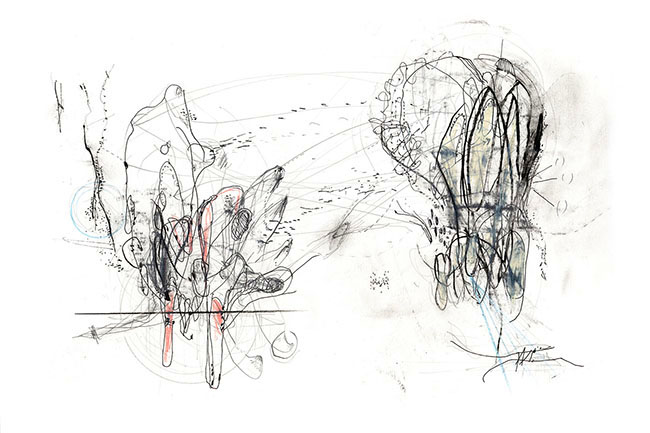 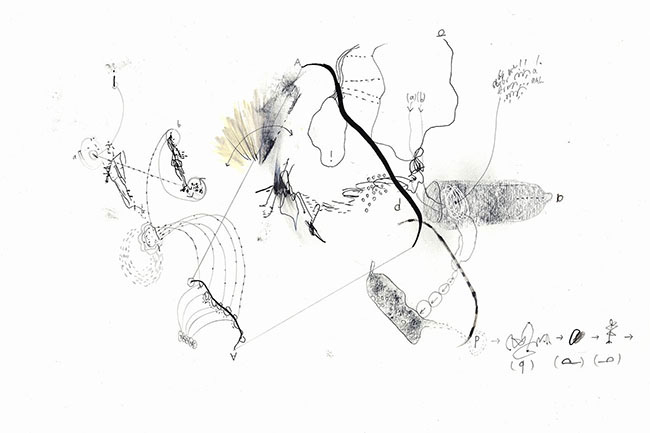 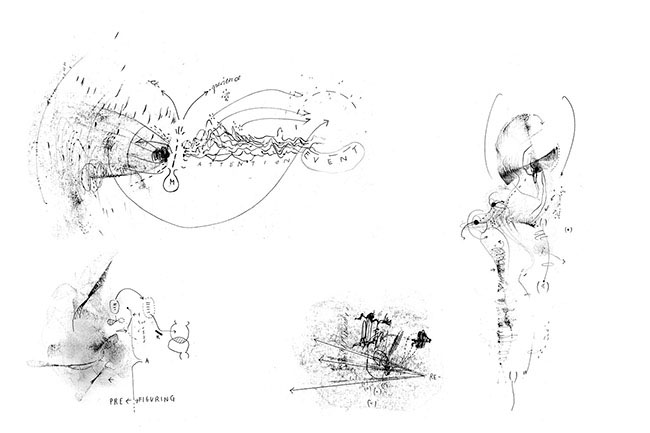 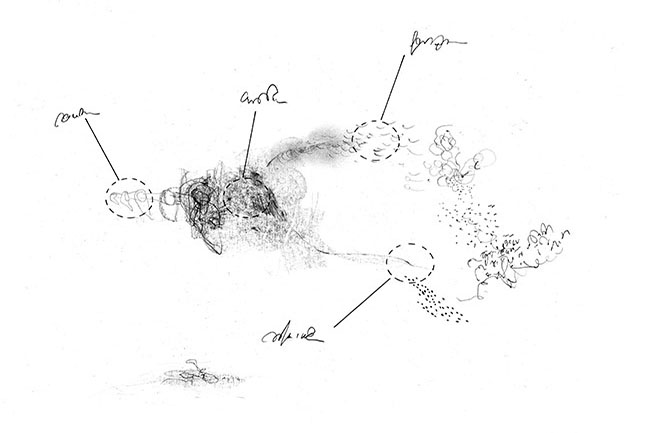 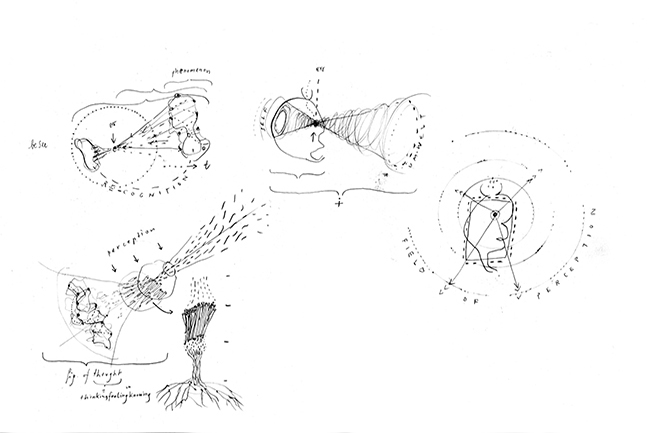 The Embodied Diagrams series by Nikolaus Gansterer all derive from the four year research project Choreo-graphic Figures: Deviations from the Line (>1). This artistic research project developed shared figures of thought, speech, and movement ("choreo-graphic figures") by creating new forms of performativity and notation for reflecting on the specific nature of ‘thinking-feeling-knowing’ operative within artistic practice (>2).

The series of Embodied Diagrams are based on an expanded, open notion of drawing, one that conceives of drawing as a translational bodily process that imagines a variety of forms in which a drawing can become manifest, materialise, and take shape. The German words for drawing (zeichnen) and for notation, recording (aufzeichnen) share the same etymological root. Embodied Diagrams extend the notion of scoring as an imaginative prompt and reflect on ‘thinking-through-drawing’. Concerned with the fundamental question of how to translate and visualise thought processes, both conscious and subconscious, it explores how the act of drawing can become a tool of communication, a score, or again an instruction for taking action by re-transforming them into epistemic objects for the reader.

Researching the reciprocity of drawing and thinking, Nikolaus Gansterer accumulated a rich archive of more than three hundred drawings over the duration of the Choreo-graphic Figures project. Specifically interested in mapping the complex relation-scape between body, place and atmosphere, Gansterer developed a cartography for forms of diagrammatic (re-)presentation of embodied knowledge(s). The selected drawings here present immanent structures of interconnectedness, visualizing the entanglement of self and world.

The Embodied Diagrams focus on the affective, embodied, relational intensities and dynamics within artistic research and creation. By tracing these fleeting micro-moments of unfolding decision-making, thinking-in-action, dynamic movements of ‘sense-making’, the durational ‘taking place’ of something happening live and the subtle processes in the event of "figuring something out" are rendered visible - even if only temporarily (>3).

In Gansterer’s diagrams, the processes of thinking and drawing are conceived as analogous, developed synonymously and analysed in terms of their identity. Just as thinking rushes ahead of the thought, drawing rushes ahead of the drawn and the process precedes the product. These micro processes have an ambivalent relationship to the things they produce, which they only bring forth in order to leave them behind. What appears to remain are but traces of that which is no longer there, figures simultaneously of absence and presence (>4).

_______
(1) Choreo-graphic Figures: Deviations from the Line (2014-2018) is a collaborative artistic research project by artist Nikolaus Gansterer , writer Emma Cocker, dancer Mariella Greil and other guest collaborators. Through processes of exchange this research seeks to pressure choreography, drawing and writing beyond the conventions, protocols and domains of each discipline: for choreography, beyond the domain of the body and space of the theatre; for drawing, beyond the domain of the two-dimensional page; for writing, beyond the domain of language, the regime of signification. Comprised of method labs, workshops, lecture-performances and resulting in an extensive series of drawings and publications.  > See: Choreo-graphic Figures: Deviations from the Line, Nikolaus Gansterer, Emma Cocker, Mariella Greil (eds.), Berlin: De Gruyter, 2017. > www.choreo-graphic-figures.net

(2) Choreo–graphic: the hyphen, a deviating line, holding two terms in proximity while also keeping them apart. Choreo – more than one or in relation to another, as in chorus, as in group, always a communication between. Graphic – the possibilities and sensitivities of inscription (of moving, drawing and writing and the modalities in between), not just for describing – representing or reproducing that which already exists – but as much a dynamic happening, capable also of bringing about, constituting, transforming.

(3) The term figuring is used to describe those small yet transformative energies and experiential shifts within the artistic process that are often hard to discern, but which ultimately shape the evolving action. Figuring refers to the perception of affective intensities felt as a field of forces — minor revelations or epiphanies, shivering full of presence: those risings that give way to emergence.
The event of figuring is conceived as a qualitative shift, the sense or awareness that ‘something is happening’ perceptible at the level of intensity, experienced as if a change of taste, colour, or perhaps even of textural density.

(4) The term figure is used to describe the point at which figuring’s dynamic vitality coalesces into communicable content. Figure understood as a multimodal, multidimensional, durational intensity, performed entanglement of bodily-kinesthetic, visual-spatial, verbal-linguistic sensibilities.